Attend the FCA Annual Meeting with your neighbors to learn what the all-volunteer FCA has been doing for you, and to learn from County Agencies what their plans are for North Tustin.

A half-hour informal discussion begins at 6:30 pm with FCA committees and Orange County agencies—many will have tables and handout materials. Presentations will begin at 7 pm. Presentations include:

After the formal presentations, County Agencies will assembly onstage for a Q&A with the audience. Find out about:

This is the 57th annual meeting of the all-volunteer Foothill Communities Association. The FCA is the only organization that supports North Tustin. We have no city council. The principal decision makers are five supervisors who do not live here. Only FCA turns problems into solutions for our residents.

At the meeting you can renew membership for $25 ($20 for seniors). For new members, the first year is free, and Lifetime Membership is $300. You can also vote for FCA Board Directors. All memberships expire at the end of the calendar year.

The Foothill Communities Association (FCA) is aware of a proposed clarification by the County of Orange to its existing nuisance ordinance regarding recreational vehicle (RV) parking on residential properties. The change proposed by the county involves adding the three words, “or recreation vehicle” to its existing ordinance such that, “… a vehicle ‘or recreation vehicle’ may be stored or parked on a paved driveway connecting a garage or carport with a public or private street.”

Poll positions
A recent FCA poll in North Tustin shows equal support on either side of the issue, with half of those responding in favor of no RV parking restrictions, and the other half supporting limits on the number of days RVs can be parked at a residence. Similar results were reported for a second poll on the storage of RVs, with half of respondents supporting no restrictions on RV storage on residential properties, while the other half supported some restrictions, such as the use of a fence, wall or landscaping as a screen, parking the RV on a paved surface and parked behind the front setback area.

The laws in the cities surrounding North Tustin, e.g., Orange, Tustin and Villa Park, all expressly prohibit the parking or storage of RVs in this manner. RVs must be parked or stored behind the residence building line, and must be screened.

However, unlike the incorporated cities surrounding North Tustin, the greater part of unincorporated Orange County is unique in its lot sizes and maintains a much more rural atmosphere, with far fewer regulatory restrictions.

The county’s more country
Many of the comments from the poll expressed a disinterest in HOAs and cited the absence of such regulatory bodies as the very reason why unincorporated Orange County is such an attractive location to live. Other comments, in equal measure, were concerned about oversized or impaired RVs interminably parked on driveways, while limiting other homeowners’ abilities to park in their own garage or driveway, thus increasing street parking, and the subsequent effects those conditions could have on neighborhood property values.

The Tustin Community Foundation recognizes, once a year, individuals who make outstanding contributions to the Tustin area community. The Foothill Communities Association nominated Lori Chew. Lori was recognized for Chairing the Steering Committee to Save The Racquet Club and providing the necessary leadership.

Rick Nelson was recognized by the Tustin Community Foundation (TCF) for building the TCF float each year for the Tustin Tiller Days Parade, supporting many of the TCF events, supplying wine from his Red Hill Winery for many of the events, and for being the President Elect of TCF. TCF also nominated Rick Nelson for Tustin Area Man of the Year this year. 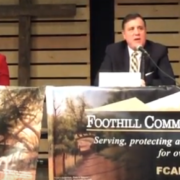 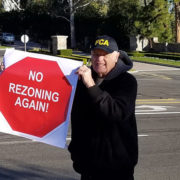